The long-awaited Ethereum Merge is set to occur between September 10 and 20, dependent on when specific on-chain metrics are reached. This will bring with it not only several on-chain upgrades but also address a very specific environmental concern that critics of digital assets have been levying against Bitcoin for years. Although any upgrade to a major platform can be intimidating, there is quite a bit of reason for optimism and may bring some big changes to how digital assets are traded and invested.

What the Upgrade Entails

With the impending Merge, Ethereum will switch from a proof of work model to proof of stake. One of the most prominent criticisms of Bitcoin is the large amount of electricity needed to mine it, as the computations in the process tend to grow more difficult as Bitcoin increases in value. Proof of stake, on the other hand, relies on miners staking their capital which can be destroyed if a miner acts with malfeasance. Up until now, Bitcoin hasn’t had a competitor on this level – the next highest minable asset by market capitalization is Binance’s BNB, which is about a tenth of Bitcoin’s – but that is about to change. Individuals, companies, and governments are all trying to become more conscious about energy usage in the face of potential climate concerns, and according to the Ethereum asset team itself, proof of stake uses up to 99.95% less electricity than an equivalent proof of work asset. The high energy use of Bitcoin was likely not considered when it was originally designed, likely because it could not have been predicted that it would have grown to the size that it has. With the Merge occurring, it helps sweeps away a criticism that the traditional finance world has towards digital assets.

The Merge will also upgrade Ethereum’s transaction throughput as a whole. Right now, Ethereum can only process roughly 13 transactions a second. While this an improvement over Bitcoin’s 7, the Bitcoin network has implemented improvements such as Lightning that drastically improve its capacity. There have been projects to implement sidechains – parallel blockchains that run alongside Ethereum’s to improve its throughput. The Merge will bring with it an upgrade that will drop the block time by one second (saving about 8%), which should bring some immediate relief. For future plans, the Merge is a necessary step on the Ethereum roadmap, and co-founder Vitalik Butler plans to support 100,000 transactions on the chain itself with a future upgrade.

Finally, there will be a 90% reduction in minting new Ethereum coins, which is a big step in pushing the asset towards a deflationary status. Ethereum has a burn mechanism which takes currency out of the system, but prior to the merge mining rewards far outpaced burned coins, which made it an inflation mitigation measure at best. This differs from Bitcoin where coins are only removed from circulation due to user error or extenuating circumstances, such as when wallets are destroyed or keys are lost. Eventually, the minting of Bitcoin will slow down and finally cease, but the stochastic nature of burned coins makes it very difficult to know exactly how much Bitcoin has been or will be removed from circulation. With Ethereum, deflation is now baked into the chain and is part of the system, and its intentional nature makes becoming a deflationary asset a much more attainable goal.

What this means for the ecosystem

The Merge is one of the most substantial network upgrades in digital asset history, which makes it difficult to predict what will happen. Naturally, any glitches, double-spending, or lost assets will destroy trust in the network at such a pivotal moment, but developers have indicated that they are well-prepared for things to go off without a hitch. Sentiment regarding the upgrade on the whole appears to be quite positive for Ethereum itself, but the bigger question is how it will affect other players in the market. Bitcoin is an absolute cornerstone of the market and an icon of the movement. However, Ethereum is in a position to correct some of the glaring concerns that the developer of Bitcoin could never have predicted, because they only appeared when the asset grew to a scale that they did not envision. Ethereum taking its new spot as the largest proof of stake coin may actually pull some attention away from Bitcoin.

In the short term, Ethereum is doing very well, having risen approximately 50% off of its 52-week low, with excitement running high prior to the event, while Bitcoin is languishing right around its own low. Bitcoin still holds several advantages over Ethereum in terms of market adoption, but these relate primarily to being a household name and first to market as well as an immense amount of momentum from many years of private and institutional investment. In terms of active developers, though, Ethereum has boasted the highest number on a monthly basis for a number of years now, and even the much smaller Cardano is giving Bitcoin a run for its money. The advantages that Bitcoin has are primarily those of recognition and inertia, but those will not last forever on their own. It is all but certain that the 2024 Bitcoin halving will shake up the markets on its own terms, but it may turn out its crown is up for grabs if it is not as able to respond to regulatory and social pressures. Only time will tell, but some of the trends that we have evidence for now appear very obvious. 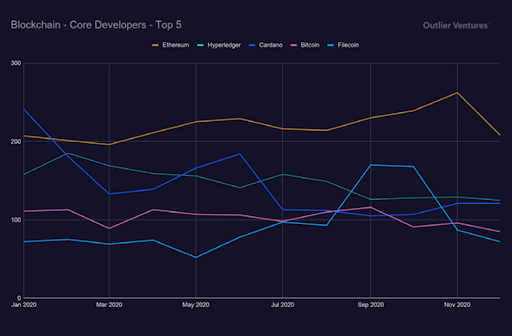 These are very exciting times not only for Ethereum but for the digital asset market as a whole. Moving away from a proof of work model will help bring newcomers to the space that may have previously been concerned about the energy use that mining entails, and the Merge is a step along the process that will make Ethereum even more appealing as a medium of value.