On February 24, 2022, the Russian government invaded Ukraine, raising tensions to their highest point in the near decades-long dispute between the two countries. The world responded to the aggression with near-unanimous disapproval, and the United States and Europe levied harsh economic sanctions on Russia in response, removing much of Russia’s access to international banking systems. The invasion has placed a tremendous shock on the citizens of both countries, and digital assets have played a pivotal role in ensuring everyday individuals from both countries can continue to manage their day-to-day affairs.

Ukraine Accepts Aid and Donations from Abroad with Ease

In response to the invasion, the Ukrainian government has set up addresses where they can be sent Bitcoin to aid in their self-defense efforts. This demonstrates just how easy it is to assist them; funds can be sent to their wallet address just as easily as any other. Even sending money to the US government often requires the sender to use ACH or wire transmissions, or else they are on the hook for covering any credit transaction fees – if the option is even offered at all. As of early March, Ukraine had received close to $100 million in crypto durations. Alex Bornyakov, Ukraine’s deputy minister of the Ministry of Digital Transformation, indicated his department has President Volodymyr Zelenskyy’s total support. Significant contributors to the fund include Polkadot co-founder Gavin Wood, Ethereum co-creator Vitalik Buterin, Tron founder Justin Sun, and the Binance exchange, along with more than 24,000 individual donators. In total, these donations comprise 1% of Ukraine’s allocated defense budget, a number that is expected to rise as the war continues.

Two funds have been created, allowing donators to choose how their funds are spent. The Crypto Fund of Ukraine has received the majority of donations, and has been used to buy necessities for civilians, including food, fuel, medical supplies, and firearms, along with non-lethal supplies such as bulletproof vests and night vision goggles from suppliers willing to take digital asset payments. The rest is being converted into fiat currency for more immediate needs. Michael Chobanian, the founder of Ukrainian cryptocurrency exchange Xreserve stated, “We are buying so much stuff that is saving lives every single day and also are stopping the aggression, so it’s a beginning of the new world.”

Due to the nature of the blockchain, where the funds are going after the government receives them is publicly visible, and it appears that funds are being spent as the government stated they would. In response to the influx of donations, Zelenskyy has signed a regulatory framework into law which has officially declared the legal status of digital assets, resolving a previously gray area in the legal system. Artem Afian, the lawyer responsible for drafting the law, feels that Ukraine has become much more responsive to the prospect of using them for common transactions, stating that the donations can “make governments see that working with crypto can be official and can be transparent and well run.”

The world has responded to the war with extreme disapproval and heavy economic sanctions intended to punish Russian aggression. However, the natural consequence is that everyday Russian citizens are feeling a heavy burden as they have been economically isolated from clients and business partners as the United States Treasury is now blocking any access to the Russian banking system from their own, and many other countries are now following suit. The Russian stock market had been effectively closed since it plummeted at the start of the invasion, and has only been very intermittently re-opened, only to be soon closed again afterwards.

Despite the Ukraine government calling upon exchanges to ban Russian users, those exchanges have largely declined to do so. Coinbase CEO Brian Armstrong tweeted, “We believe everyone deserves access to basic financial services unless the law says otherwise … We are not going to unilaterally freeze millions of innocent users’ accounts. Crypto is meant to provide greater financial freedom for people across the globe. To unilaterally decide to ban people’s access to their crypto would fly in the face of the reason why crypto exists.” He added that many ordinary also Russians oppose what their country is doing, and such a unilateral ban would harm them as well. Binance also declined to unilaterally freeze their millions of Russian user accounts.

In just a short month, the ruble has lost half of its value compared to the US dollar, while Bitcoin’s own price has risen 23%. Payments from processors Visa, Mastercard, and PayPal, as well as Apple Pay, Google Pay, and Samsung Pay have all been suspended. By late February, trading volumes in Bitcoin using the ruble had surged to their highest level in a year. There are a significant number of Russian nationals that work in the tech sector for overseas clients that are wholly uninvolved in the war, but they are paid through payment processors that no longer work in the country. Though the United States government demands that cryptocurrency not be used to evade these bans, in practice such action is extremely difficult to enforce, especially when Bitcoin can simply be sent directly and doesn’t need to be sent through an exchange. 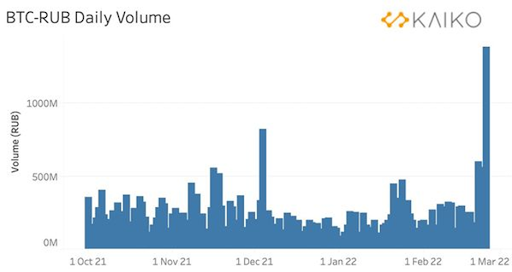 The war in Ukraine has demonstrated how tenuous legacy banking systems can be when presented with highly extenuating circumstances. Russian citizens are not only cut off from the international banking system at large, but the value of the ruble has plummeted in response. Digital assets give them a way to not only transact outside their borders, but hold the value of their currency. Meanwhile, Ukraine has benefited immensely from international aid, as it has been able to accept donations freely from citizens around the world without the involvement of legacy banking systems or middlemen.