Although there is much reason for optimism on the pandemic front, the long-awaited shock of inflation has finally hit the market and investors and banks are struggling to digest it. A combination of fiscal policy and supply chain slowdowns have caused inflation to spike and while it was widely known it was going to arrive at some point, the impact was a bit heavier than expected with implications for both traditional banking as well as the digital asset sphere.

Inflation Throughout the Pandemic and Beyond

Inflation is a lagging indicator, and throughout the heart of the pre-vaccine pandemic, 2020 saw average to below average inflation. However, once the fiscal policies of both administrations were accounted for, the United States saw some of its worst inflation since 1980, with a yearly inflation of approximately 7%. Both presidential administrations had much of the same approach to pandemic relief, with quantitative easing being employed, stimulus checks being issued to all eligible American citizens, and additional PPP loans with easily achievable forgiveness being offered to businesses and self-employed workers. The upshot is that currency was flowing into the economy from all sides leading to a serious devaluation once the economy was given a chance to digest it. Overall, the Federal Reserve injected a total of approximately $5 trillion into the economy in pandemic fiscal relief. 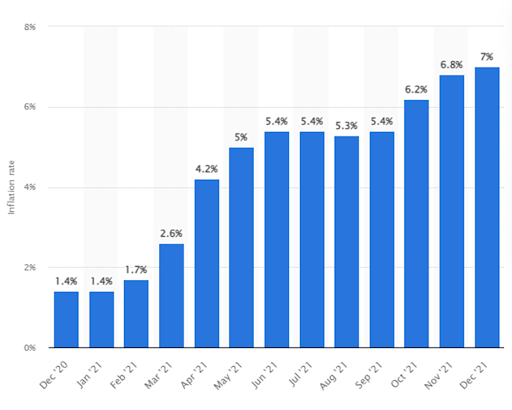 Compounding this shock are supply chain concerns created by constraints placed during the pandemic that have yet to fully resolve. Though demand was briefly tamped down by lockdowns in 2020, distancing measures and concerns related to the pandemic caused e-commerce and online shopping demand to soar to levels never seen prior. Manufacturers were simply not able to keep up as materials were in short supply, especially semiconductors. Shipping containers are left deadlocked across the world, and qualified workers and drivers are in short supply. Nike is a sterling demonstration of this problem, with shoes taking an average of 80 days to transit through the chain from manufacturer to point of sale, which is twice as long as it took prior to 2020. This has resulted in pressure on firms to raise prices for goods and services to recoup lost income.

It does not appear there is an easy end to the supply chain woes, and figures such as Siemens Energy CEO Christian Bruch expect them to continue as they are well through 2022, with some knock-on effects taking even longer to resolve. A wider-ranging survey of 900 global CEOs indicates that 55% believe that pricing pressures will continue to 2023 and beyond. Whether the result be from supply chain or fiscal policy, it is clear that consumers will need to endure sticker shock for some time longer.

How Inflation Will Impact Traditional Finance

The Federal Reserve is expected to raise interest rates from their current rock-bottom location beginning in March, and projects raising them three to four times throughout 2022. Generally, raising rates causes the economy to slow as well as tamp down inflation. Rates on consumer loans and credit card rates will also rise as a result, which will stymie purchases of big-ticket items such as vehicles and homes. Sentiment surrounding the situation is rather negative, and many analysts believe the Fed will need to be even more aggressive than they have let on to actually wrap their arms around the situation.

While the Fed has largely maintained that the recent inflation spikes are “transitory” high-profile banking executives are not so convinced. Goldman Sachs COO John Waldron recently described inflation as the most pressing risk that could potentially detail global markets. JPMorgan CEO Jamie Dimon concurred, advising that banks “should be worried” about increasing volatility as a result of the inflation. Although inflation can be profitable for banks in the short term, run-away or sustained inflation presents credit risks for lenders. Clients may need additional capital to get them through dry spells if their consumers do not bite on raised prices, or they may struggle with paying loans back if revenue slows down. Essentially, banks do not mind inflation up to a certain point, but then it can quickly become unmanageable, and the mood is pessimistic as there is little reason to believe that conditions will resolve this year.

Moving to digital assets, the price of Bitcoin has fallen steeply from its all time high, and has been in a rough holding pattern throughout most of January as all eyes are on a pending executive order on cryptocurrency regulation due in February along with looking to Federal Reserve action for further clues. The price is unlikely to budge much pending resolution of these external factors. However, the Crypto Fear & Greed index has finally exited its “extreme fear” zone for the first time since January 3rd, indicating that negative sentiment may be turning a corner. Bitcoin has been cited many times as a safe haven or a hedge against inflation, and as long as the government report on its regulation is not too dire it appears there will be reason for optimism in the coming months.

Just as it took time for inflation to strike the economy following pandemic assistance policy and supply chain concerns, it will take time for it to dissipate as the problems are rectified over the coming year. As the supply chain has a staggering number of moving parts that are dependent on each other and Federal Reserve action is staged to be implemented over the course of the year, inflation is likely to be an extant factor for the following year, if not longer. However, this gives Bitcoin the breathing room it needs to stage a rebound as investors seek inflation-resistant assets and safe havens.