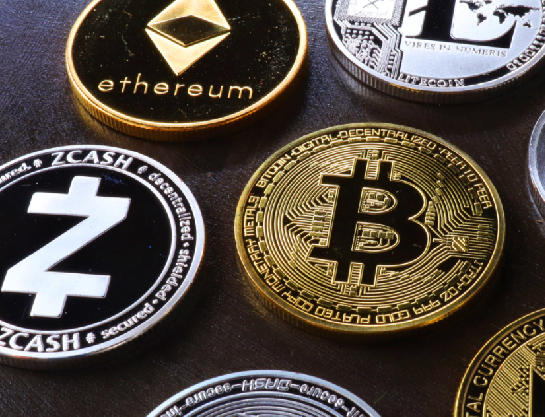 Bitcoin continues its frenzy, reaching yet another all-time high above $28,000 on December 27, 2020. This represents a gain of more than 200% year to date, and one of the best years for the asset to boot. However, the digital asset sphere is more than just Bitcoin, despite how often it takes the spotlight. Other coins have different value propositions and fill certain needs more effectively than Bitcoin, and the rising tide generated by Bitcoin will lift all boats in the system. Often dubbed “altcoin season” by its proponents, the positive press and movement generated by Bitcoin will inevitably spark research and interest in lesser-known coins.

With another stimulus package all but confirmed at this point, investors have taken heed and have been searching for a hedge against the inevitable inflation. Buoyed by the continuing price run-up and continuing a months-long trend, institutional investors continue to drive further interest in Bitcoin. On December 9, quantitative strategist Nikolaos Panigirtzoglou of JPMorgan Chase & Co noted that money is flowing out of gold and into Bitcoin, despite the adoption of bitcoin among institutions being very young and the understanding of gold being very thorough. JPMorgan further cited the Grayscale Bitcoin Trust experiencing outflows since October of almost $2 billion USD, compared to outflows of $7 billion of gold-backed funds. United Kingdom asset manager Ruffer, which manages $27.6 billion USD in assets, also revealed that it had invested 2.5% of its portfolio “as a small but potent insurance policy against the continuing devaluation of the world’s major currencies.”

Michael Sonneshein, managing director of Grayscale concurred, stating, “Our flows are now probably up six times what they were last year, and the types of investors that are putting capital to work are unlike any of the investors we’ve seen ever before.” Eric Demuth, co-founder of trading application Bitpanda indicated that the institutional interest makes this completely different from prior run-ups, and that a lot of those big investors that were previously critics have now switched their tune and are investing heavily in Bitcoin. With institutional investors rather than retail investors doing most of the heavy lifting with this run-up, more staying power is also expected compared to price runs such as the $20,000 surge and subsequent massive pullback in 2017.

This has also resulted in a shortage of available bitcoin to purchase, which has also factored into the price spike. Now that PayPal has finished its integration, it has added 300 million new accounts to the 100 million crypto users that have been aggregated over the past decade. Together, CashApp and Bitcoin purchases have accounted for more than 100% of all newly minted bitcoin. Over the next decade the amount of incoming bitcoin will continue to decrease with barriers to entry also continuing to topple. While the next Bitcoin halvening is not until 2024, now that it is being more accepted as a long term asset class, that point will become relevant a lot sooner than anticipated and there is now ample history to draw from to predict how the market will react to the event.

Altcoins Will Have Their Day

With any investment, corrections are inevitable. Even the bullish institutional investors feel there will be a pullback at some point. Despite JPMorgan’s optimism, in the short term, they indicated that momentum signals have fallen off which will induce at least some level of selling based on price trends. Not all of those investors will prefer to leave the digital asset sphere, however, and that is when altcoin season flourishes. As demand for Bitcoin decreases, that money will flow into altcoins. Prior altcoin seasons have had huge winners, such as with Dashcoin (DASH) being priced at $10 in January 2017, and rising to $1439 in January 2018 following 2017’s altcoin season. As of this writing, DASH is still worth $104; while a far cry from its peak, still a thoroughly handsome return on investment over its 2017 price. Altcoin seasons can be kingmakers for certain assets if they perform well, which is why they are so highly anticipated among certain investors. As of this writing, the bitcoin dominance index (BTC.D) sits right at about 70%, the highest it has been since 2019. Bitcoin dominance is Bitcoin’s share of the total digital asset market cap — and its proximity to the previous high which was only touched twice previously in the past two years is a data point to examine closely as institutional money continues to flow into bitcoin. 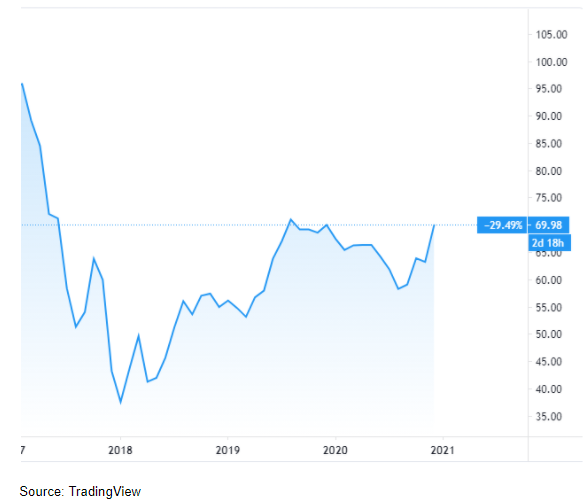 That said, the obvious goal is still to buy low and sell high, so the bigger question is how these opportunities can be spotted before they occur. One metric commonly cited among altcoin investors is, “If 75% of the Top 50 coins performed better than Bitcoin over the last season (90 days) it is Altcoin Season.” While that does shed some light on the situation it is also backward facing in that you will not see it occurring until it already has. When a history of altcoin versus bitcoin seasons is reviewed, based on the number of altcoins outperforming Bitcoin, a relatively cyclic pattern can be discerned.

As evident from the graph, we are currently in the altcoin trough, driven by Bitcoin’s all time highs. It also seems evident that the bottom has already been found, and altcoin prices are already trending back upwards, tracking with Bitcoin’s price pullback following its all time high. All the signs seem to be pointing towards solid altcoin performance over the coming months. Further likely is that altcoin prices will be driven by those with a greater risk appetite seeking greater short-term returns. The institutional investment in Bitcoin right now is driven by its relative stability and acceptance compared to altcoins, so retail investors will likely see greater action in the altcoin arena.

There is still a great amount of uncertainty to be waded through in the coming months. Although vaccines were authorized for use by the FDA on December 11 and December 18, as of December 21 only approximately 0.2% of individuals in the United States have received the first of two doses they need to be successfully inoculated. This, combined with the stimulus package that has just passed, signals that adverse economic conditions may yet remain for some time. Digital assets as previously demonstrated have become a safe haven for funds, and given the positioning and direction their respective markets are turning in, altcoins could very potentially pop off in very short order with uncertainty persisting in traditional markets.

The cyclic nature between Bitcoin and altcoins have been witnessed many times over appear to be coming for another round. Bitcoin has had a stunning year buoyed by institutional investments, but looking at the relationship data between Bitcoin and the rest of the ecosystem makes it appear that altcoins are about to have a surge of their own. “Altcoin season” can only be described as a boon to the digital asset ecosystem as a whole, as it will put the focus once again on decentralized finance and other beneficial paradigms that to date have only found purchase within the altcoin side of the market.