2019 has brought significant changes to the venture capital market; some existing data points have solidified and become new trends in their own right, and other well-known aspects of the investment ecosystem have dwindled away and been supplanted by new rules. 2019 continued a historic, almost unprecedented bull run, and even as it reached its peak, there have been shifts in how deals are made that will bear great importance heading into 2020.

Deals are Fewer and Larger Between

One of the clearest trends of 2019 was the fact that venture capital deals were trending fewer in count and larger in scope. A common conjecture for this is that more vetting was occurring and more care was being taken, given the unprecedented length of the bull market run that was witnessed following the 2009 Great Recession. Venture capital details were focused on less speculation than previously allowed for, and deal counts lowered across all stages especially towards the end of the year while deal valuations concomitantly stayed the same or even increased. The market was still healthy and open for business, but more care was being taken as the year wore on. Venture capital “megadeals” with a minimum value of $100m also dramatically increased, continuing to set new records over prior years.

To follow this, Investors are also seeking higher levels of performance overall. Fewer startups are reaching their Series A rounds, but on the flipside, they are becoming more profitable when they do reach them. Over the past decade, we have traveled from less than 10% of Series A fund recipients turning a profit up to 70%, and that figure is still rising.

Following the other side of the market, micro-funds continued to decline over previous years and reached the lowest level of valuation since 2011. In the current investment market, these have been viewed as struggling to maintain and hold equity stakes compared to larger offerings. As startups are growing more mature and require bigger checks to cash, smaller funds have found it hard to compete as the market grows more and more crowded. Additionally, companies have shifted their funding to later stages, in which funding needs tend to be greater, and startups have tended to stay private longer than they have in the past. Nevertheless, the value invested in the market continues to grow and stay strong, merely distributed over a smaller number of deals. 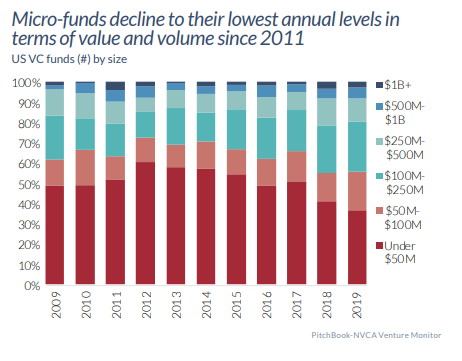 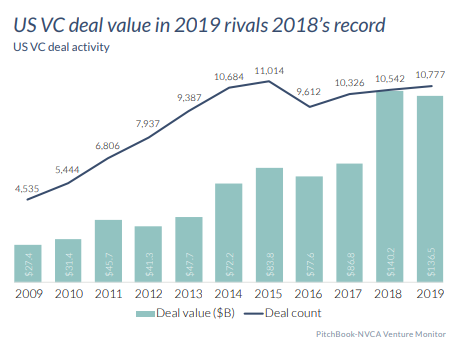 2018 set records for early-stage venture capital investment, and levels in 2019 nearly met those records. The average age of a company seeking early-stage investment has continued to rise, reaching a new median of 3.5 years. Because companies are now tending to be older when they seek funding, they also have more defined business models, giving investors more information to work with.

On the other hand, while late-stage deal valuations dipped slightly more, their deal counts spiked surprisingly high. Valuations were hurt by certain high profile failures that accompanied a large section of the financial news cycle later in 2019. However, if an opportunity appears attractive, it’s apparent that investors will not shy away from them. Across all stages, there has been an overall massive influx of capital proceeding into 2019, continuing a charge into record territory.

With the growing interconnectedness of devices through the growing use of Internet of Things, networking “air gaps” being proven to be less and less effective, and systems growing simultaneously more ubiquitous and pervasive, cybersecurity is reaching becoming more and more important as a risk management necessity and also finding new cachet as an investment option. Pharmaceuticals, biotech, and healthtech have also been driven to new heights. New records have been set by these sectors; for example, healthcare represented 69% of total IPOs in Q4. Now that healthcare is the center spotlight, it seems indisputable that investment options will continue to flourish in this section of the market and play a key part in 2020 and beyond. 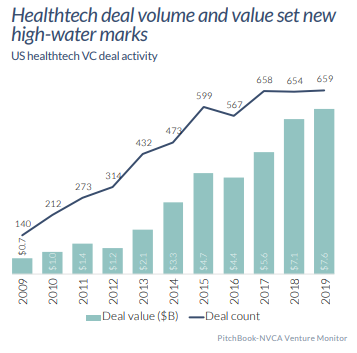 Artificial Intelligence startups are also setting new records, as it is playing a larger role in other fields and becoming a sort of Swiss Army Knife, having applications in several different methods, including research, hospitals and medicine and healthcare, and even in the application of venture capital investment itself. The amount of data available to make decisions with is growing at an exponential rate, and we have long surpassed the point in which humans can be relied on to accurately sift through it all to make decisions with as close to perfect information as possible. In addition, resources are finite, and AI has become a determining factor as to which opportunities should be pursued at all to apply those limited resources.

A review of the 2019 trends reveals that investors have become overall more cautious and preferring to sink funds into more heavily vetted options that have already demonstrated solid, viable business plans. Deal counts have fallen, but aggregate deal amounts have stayed the same or risen. There are also many bright spots for burgeoning fields, even in the context of a previously bullish economy. The current ecosystem will drive investors to companies with fundamental solutions and real-world, direct applications.