Weighing In on Facebook’s Project Libra

A New Opportunity and a Powerful Backer

Although Facebook’s Project Libra stablecoin has been kept under wraps in development for some time now, the buzz around the project has grown louder and louder recently. While the digital assets space is rich with diversity and has no shortage of interesting projects to report on, this one in particular has eclipsed them and been brought to the forefront of the media. The combination of buy-in from major technical partners combined with Facebook’s massive clout has catapulted this asset into the spotlight in a manner that few other companies would be capable of.

Libra’s Value Offering for the Market

At the heart of it, Libra is a stablecoin whose value is tied to a handful of top national currencies, including USD, JPY, EUR, GBP among others. Facebook’s Libra Association is comprised of 27 initial partners, among them digital assets mainstay Coinbase, tech giants Uber, Lyft, and Vodafone, and payment processors PayPal, Visa, MasterCard, and Stripe, among others. A selection of these members has each invested $10 million into the network in return for the chance to run their own proof-of-stake node. Facebook plans to expand this to at least 100 partners by 2020, representing an unprecedented collaborative effort from corporate money into the digital assets space. 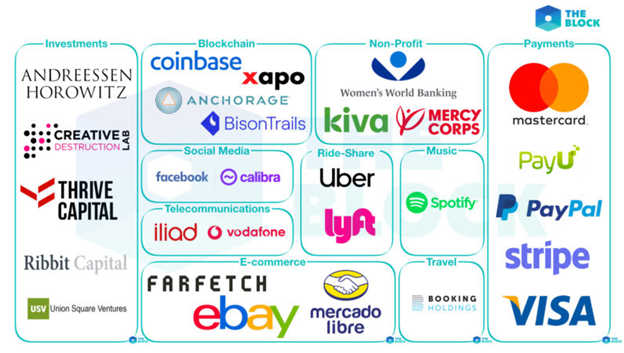 In theory, the purpose and use cases of Libra will be familiar to anyone knowledgeable about digital assets; to transfer value through a blockchain method that’s faster, easier, and cheaper than standard fiat payment processors. What makes Libra different, however, is the sheer level of backing behind it, which is unprecedented for a digital assets project. The level of reach that Facebook has to customers is staggering; Facebook has 2.7 billion monthly active users combined over its flagship platform as well as WhatsApp, Instagram, and Messenger. Over one-third of the earth’s population is on either Facebook or one of its enclave of offerings; a userbase that only continues to grow quarter-over-quarter. That is a tremendous section of users that will now have had access to a digital asset offered to them for the first time.

Secondly, consider the market for transactions that Libra will occupy. Casual peer-to-peer transactions are huge, and in this market, users are looking for speed and simplicity so they can complete their transaction and move on with their day. Although this is a function that digital assets certainly serve well enough, the effort in getting other users on board with them can often be cumbersome and that has proven to be one of the largest stumbling blocks in adoption for this purpose. However, it is clear there is a market demand here that is still going unmet. Venmo is an offering that has already demonstrated that there is a huge market shown in the graph below, proves that there is a swelling demand for these fast, simple, peer-to-peer value transfers. It’s clear that users want to be able to send money as quickly and easily as possible, especially since more and more people are looking to leave cash out of the equation in favor of an electronic method. 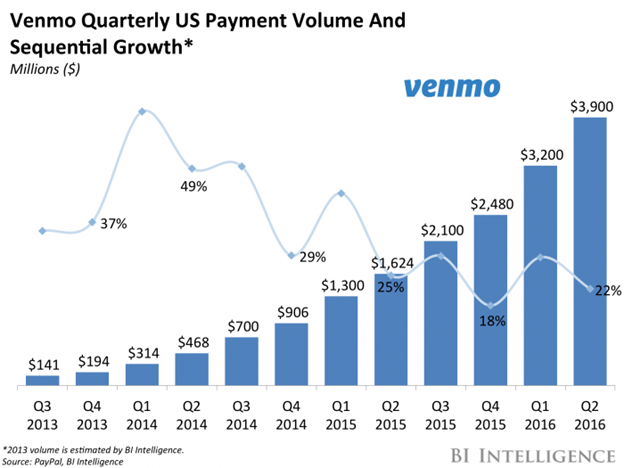 This is the space that Facebook will look to move into with Libra. Through the strength and trust of Facebook’s brand, their integration into day-to-day social interaction, and the ease with which they can offer this new digital asset, they will be able to move them into the mainstream like a Trojan horse, bypassing the misconceptions and learning curves regarding digital assets, instead of placing the onus on the users to overcome them on their own.

How Libra will Reshape the Digital Assets Investment and Development Space

Due to its scope and nature, Libra was met with an immediate response from lawmakers not only the United States, but France and Germany as well. Because Facebook is putting itself on the line directly in representing a digital asset, it provides a convenient target for regulators. The difference between this and previous efforts though is Facebook has the political and financial clout to see their project through to completion. Now that they have officially crossed the Rubicon by putting out their Libra announcement, they will consume and hold space so that energy is directed at them rather than smaller digital asset projects that would not have the wherewithal to fight back.

Secondly, because Libra will already have subsumed these regulatory battles, it will represent a space for developers in which they can pursue new projects without having to struggle through the regulatory burdens that would inevitably come their way otherwise. Because Facebook would be the entity responsible for handling these concerns, developers would have their own space to work in and would not need to answer to the government. This will be especially useful for smaller projects or students looking to gain an understanding of blockchain without having to add the burden of legal and regulatory knowledge to their already busy schedule.

Thirdly, through its massive global reach, Libra will be able to penetrate developing markets that might have previously been inaccessible. Countries with extremely weak currencies such as Zimbabwe are already using alternatives such as Bitcoin to transact, but users in poor countries also still run into the same social and technological hurdles to adopt them. Adding a new, untouched set of users to the digital assets space can only be beneficial, as it thrives on use and engagement more than anything else.

Libra is a tremendous boon to the digital asset space in many ways, but the most prominent is simply through making digital assets a household name. Perhaps the largest barrier to expanding the space is not technical knowledge or securing investment capital, but simply getting them into the hands of users in a digestible, easy to understand format. Because of the technical nature of digital asset projects, this is not always an easy task. However, Facebook is one of the companies best suited to completing this mission through the strength of their brand name alone as well as the financial and technical power they can bring to bear.