It is true that Bitcoin’s price and overall market health has had wild swings over the past year, and the tumultuous market crash in 2018 soured public perception of the coin. Nevertheless, the cryptocurrency space has worked diligently over the past year to shore up the weak points and return to the fundamental, democratized roots of the coin and focus on improving its viability as a fast, cheap, and available medium of exchange. That hard work is beginning to reap dividends and the newly energized space is beginning to show not only signs of healthy growth, but also a much larger bull run beginning to emerge.

Once a business accepts Bitcoin, it generally does not drop support for it, as evidenced by this graph.

Even the largest price downturns did not register more than a faint blip in market adoption, and over time the market has continued to make strides in this realm. Considering the low cost of implementing cryptocurrency compared to traditional methods such as credit cards, accepting Bitcoin represents a competitive advantage that can be gained over other businesses. The more choices that consumers have to pay with crypto, the healthier the space will be.

As Bitcoin becomes easier and more intuitive to use, one of the largest new drivers among this community will be of recurring purchases of consumables, individual sundries, and smaller-value items, rather than one-time large purchases. While it is encouraging to see tech companies such as Microsoft integrating Bitcoin, the true drivers of the economy will be retailers like Starbucks, Whole Foods and Crate & Barrel, all of which also now accept Bitcoin for smaller, more frequent purchases. This more frequent use represents more chances for it to be discussed among its user base, which will help it grow even faster through word of mouth. (Chart Source: VisualCapitalist) 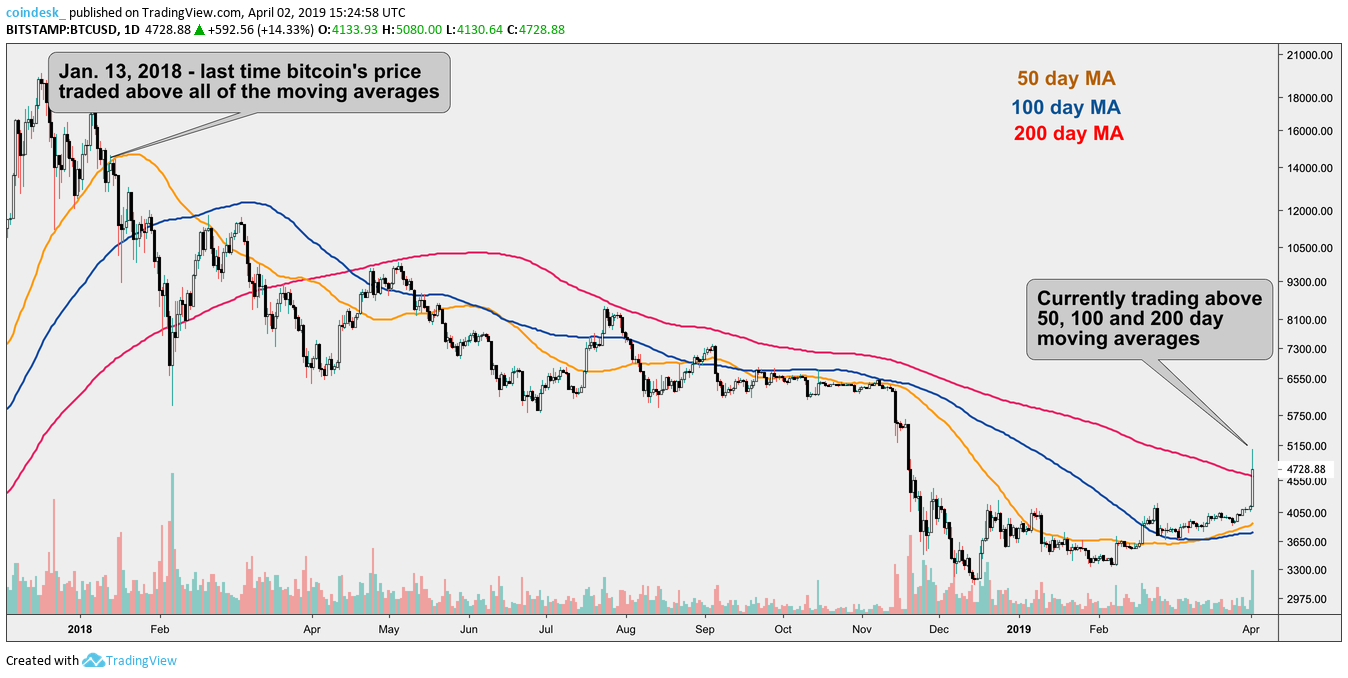 The price of Bitcoin has now pushed through three moving average indicators which show sustained, healthy growth over a long period of time. Moving averages have long been considered a fundamental method of gauging market health, filtering out random noise and incorporating lagging indicators that may not be evident when day-to-day price fluctuations are examined.

There are a few reasons that these averages are being surpassed; the first, of course, is that the $19k peak has since aged out of these windows, but they also show that the market has enjoyed relative stability once the floor was reached and that the price has climbed steadily and surely, as opposed to the wild, uncontrollable swings of 2018 as the market struggled to find its resting point. (Chart Source: CoinDesk)

Unique Bitcoin wallet addresses used in May 2019 surged to a level not seen over the prior 180 days. This could result from a multitude of factors, the two most prominent being that new services utilizing Bitcoin are being developed and coming online which generates new addresses, or that individuals are entering or reentering the market. Many services allow for new addresses to be created on the spot for any reason at all, but bear in mind that those addresses would not exist if it were not for users creating and utilizing them. As more services come online and give users more options and reasons to use them, this number will undoubtedly continue to grow. (Chart Source: blockchain.info)

4. Transactions Not Including the Top 100 Addresses

Transactions not involving the top 100 addresses are also gradually trending upwards, suggesting healthy P2P, B2B, or P2B transactions are growing as well. A strong cryptocurrency market requires organic participation from all levels of the market, rather than whales and investors merely trading coins back and forth while everyone sits on the sidelines and watches. A currency’s primary purpose is acting as a medium for exchange, and transactions growing beyond the highest point of the market shows that that is occurring. In 2017, the richest 100 addresses controlled 17.3% of all issued currency, so it is a significant amount of high-level activity that is being excluded by this graph to demonstrate viability at the lower end.

On May 6th, Fidelity Investments announced that it was opening up Bitcoin trading to institutional clients, breaking ranks with a Wall Street financial system that has up to this point been reluctant to engage with Bitcoin. Initially, Fidelity participated in the crypto space as a custodian, which meant they would safeguard existing assets, but not participate directly in the market. Since they are offering trading services to only institutional clients at this time, this is a strong indicator that market sentiment is beginning to shift regarding cryptocurrency. Previously, it was seen as a risky investment and difficult to work with; institutions cited security, volatility, and lack of regulations as the primary reasons for avoiding it. It would seem given the data points shown previously that this is a market segment that can no longer be ignored.

Anthony Pompliano, co-founder and partner of Morgan Creek spoke of the announcement by saying, “Eventually, every financial services company will do this. If Bitcoin achieved $100+ billion market cap without institutional interest, imagine what happens when the smart money joins.” Up until now, the vast majority of Bitcoin investment in the US has been through retail investments and prices have already seen peaks of nearly $20,000. As of this writing, the price has broken back through the $7,000 barrier and still climbing. It is a compelling thought that institutions are beginning to examine the market seriously at this stage of the game after the last market peak did not give them a reason to invest. If the biggest investors with the greatest pools of collective financial acumen are now interested in a space that has up until now been populated almost entirely by retail investors; that is surely a sign that further potential in the market exists.

The past year has represented something of a cocoon for Bitcoin, giving it a chance to rest and reinvent itself. The falling price has given the community a great chance to work on developing and bolstering the financial ecosystem and given the currency a chance to shed its connotations of being a speculative gambling venue rather than the medium of trade and investment that it truly is. If the market heads in the direction that all of these positive indicators are pointing in, it will truly be a bull run to remember.